You’ll find our blog to be a wealth of information, covering everything from local market statistics and home values to community happenings. That’s because we care about the community and want to help you find your place in it. Please reach out if you have any questions at all. We’d love to talk with you!

- New listings were down through most of 2022. This was part of the equation that created low inventory.

- The number of closed sales was at an increase during the first half of 2022, but ended in a decrease for the total year compared to 2021. This is partly because the squeeze in inventory actually limited the number of transactions happening in the market, particularly in high demand areas.

- Pricing is still at an increase with average sales price up 12+% for the total year.

Want to talk ideas for YOUR real estate plan? Just give me a call or text! 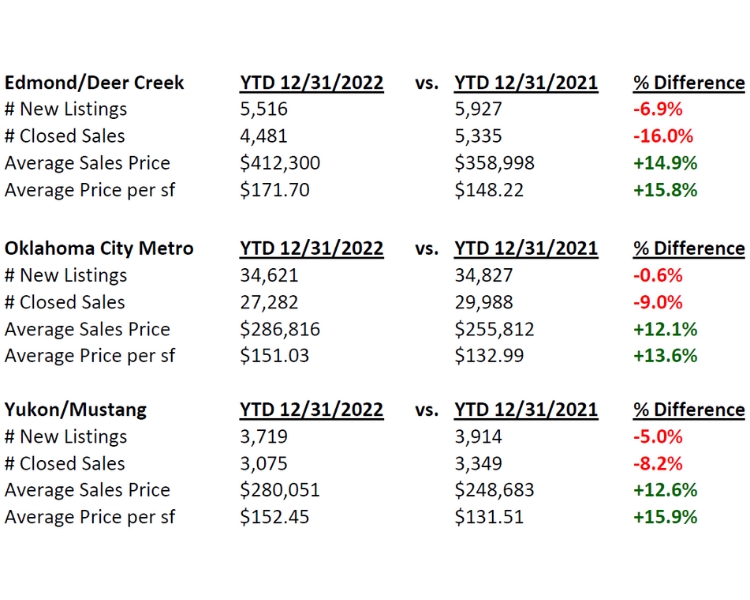 For the most part the market has begun to normalize from the peak we saw this past summer. Days on market are up to 31 Days on average.

Want to talk ideas for YOUR real estate plan? Just give me a call or text! 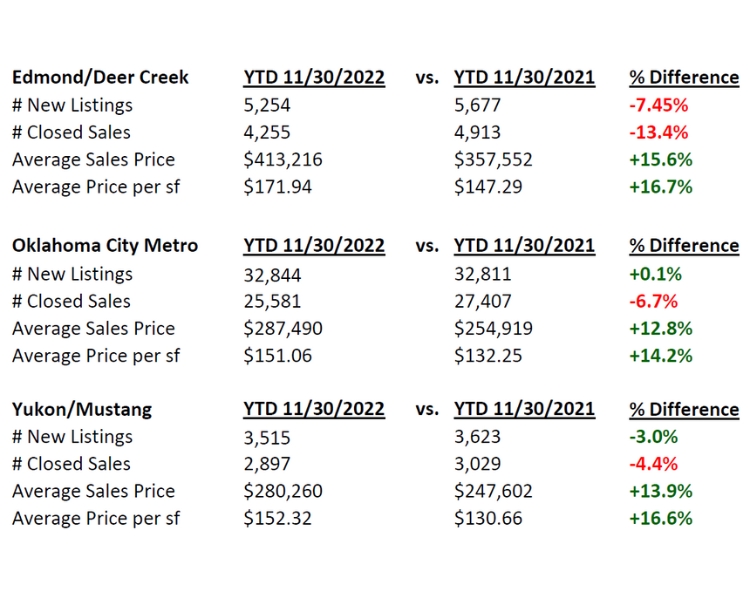 Happy Thanksgiving! I love this holiday week and the incredible power of GRATEFULNESS in our lives.

- Inventory is at a 14 week supply

- This is up from a 6 week supply in June

This month you can also check out the info specifically for: 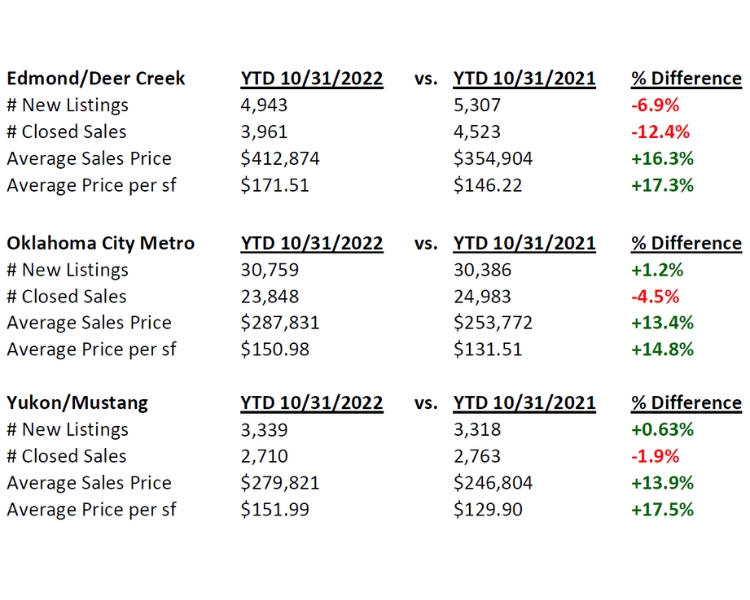 Posted in Market Updates
no comments yet

I hope you are having a tremendous start to your fall season! Here, I am covering the market data as of September 30th - so this is a 3rd quarter report

The numbers are definitely showing us a shift in the market. (I cover this in more detail in the video)

- Inventory is at a 9 week supply 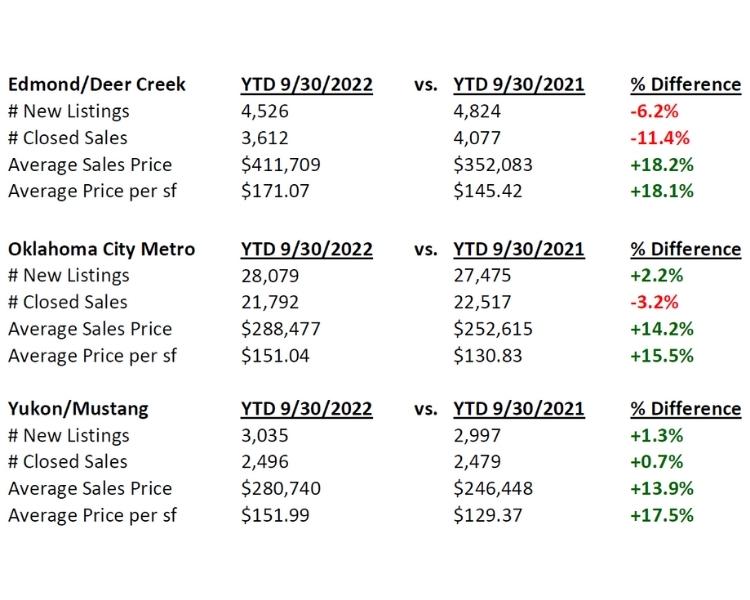 Welcome to the October update for the Oklahoma City real estate market. Every day right now folks are asking me what kind of shift is in the market - is there a slowdown? So, we're going to compare a lot of the numbers for today to June of this year. This means we're comparing now to just three months back before some of the rate increases had effect on the market. You can see on the video, the the most recent rate increases from the FED. Three quarters of a point at a time - that's very aggressive, historically, for the way they influence market rates. The the result of this on mortgage rates is that right now we have clients that are locking at seven to seven and a quarter percent on their mortgage loan - compared to just three months ago when the same type of customer would have been locking at five and a half, maybe even lower. So it has changed the interest rate in an actual purchase and that's sure to have some impact on the market. Let's take a look at the numbers! In these numbers you're going to see some shift in the market but not "crazy", not a lot of movement just some incremental changes on each of these indicators.

First, let's look at inventory. Right now we're at a nine week supply in the Oklahoma City Market. Now, if you compare that to June of this year - we had a six week supply at that time. I've said it before but Oklahoma City usually is in oversupply. There's so much land around us. I mean, you go five minutes in any direction and there's more land that could be developed and built on. Normally, our market exists in oversupply. What we've seen the last two years as the first time this has really ever happened in Oklahoma so a nine week Supply or just over two months is not that drastic.

Now let's look at Days on Market - probably one of the best indicators of market temperature. Right now, the days on market is averaging at 22, and the median is nine. So the the good houses in the better locations with the better finishes - those are going (under contract) in the first week to nine days - something in that time frame. The average is at 22. this is not a drastic increase, but it is up from June of this year when the average was 14 and the median days on market was just four.

Okay, now let's look at list-to-sale-price ratio. As of the end of September, the list-to-sale-price ratio was 99%. Contrast that to June of this year when the list of sale price ratio was 102%. So you can see a shift there. Let me give you a little better perspective on this. If you look at numbers pre-pandemic, I mean for years and years, a normal list-to-sale-price ratio in our area was 98%. In other words, I used to tell buyers and sellers at that time a 2% negotiating margin is pretty normal. What we just came out of the last two years - we saw more sales that were over list price than we've probably ever seen in the Oklahoma City Market. That's settling now - the average now is at 99%.

Thanks for joining me today and be sure and tune in next time as we Take the market... and Break it Down!

Posted in Market Updates
no comments yet

Curious about local real estate? So are we! Every month we review trends in our real estate market and consider the number of homes on the market in each price tier, the amount of time particular homes have been listed for sale, specific neighborhood trends, the median price and square footage of each home sold and so much more. We’d love to invite you to do the same!

Get Local Market Reports Sent Directly to You

You can sign up here to receive your own market report, delivered as often as you like! It contains current information on pending, active and just sold properties so you can see actual homes in your neighborhood. You can review your area on a larger scale, as well, by refining your search to include properties across the city or county. As you notice price and size trends, please contact us for clarification or to have any questions answered.

We can definitely fill you in on details that are not listed on the report and help you determine the best home for you. If you are wondering if now is the time to sell, please try out our INSTANT home value tool. You’ll get an estimate on the value of your property in today’s market. Either way, we hope to hear from you soon as you get to know our neighborhoods and local real estate market better.